Buying a term life insurance policy based on an insurers claim settlement ratio (CSR) is a meaningless exercise. All it does is offer psychological comfort to the buyer who refuses to understand that each death, and therefore each claim settlement is unique. When a nominee applies for a claim, the insurers CSR is irrelevant.

That said, when a young earner wants to know, ‘which policy should I  buy?”, or ‘how to choose a term policy?’, we typically say, ‘choose an insurer you are comfortable with, just be honest while applying’.

Unfortunately, I find that this is not of much use, as the person still needs a simple way to define a comfort zone and short-list insurers inside the zone. The honesty part is of course always relevant!

Therefore, in this post, much as I do not like it, I would like to propose a simple way, based on the CSR, to short-list insurers for purchasing a term plan.

The whole process should take you no more than 15-30 minutes.

One good thing that has come out of the CSR hype is that the insurers (incl LIC) have also fallen for it! Some make it a point to flaunt their CSR. This might be a good development from the (future) customers point of view. If the CSR drops, insurers have begun to realise that it could impact image and therefore sales.

Let me start with an analogy between an insurer and a teacher evaluating answer scripts. As the teacher starts evaluating scripts, he/she gets a sense of what the average mark of the class would be. When a student scores little or no marks in the first few questions, the teacher realizes that the total mark would be much lower the class average. Therefore, the tendency would be to be a bit generous in the next few questions so that the total is bolstered a bit.

On the other hand, if the first few questions are well written, the tendency would be to scrutinize, the whole paper(!) a bit closer. This is normal human tendency and even a teacher with no pressure from the administration is likely to do this.

Why won’t an insurer who receives a big-ticket claim  scrutinize it tougher? After all, there is much more at stake.

The point is, LIC or private players, no one is likely to offer term cover claim settlement on a platter. Of course, there is a due process clearly mandated by IRDA.

The following is a screenshot from the  IRDA annual report 2010-11 (click to enlarge). 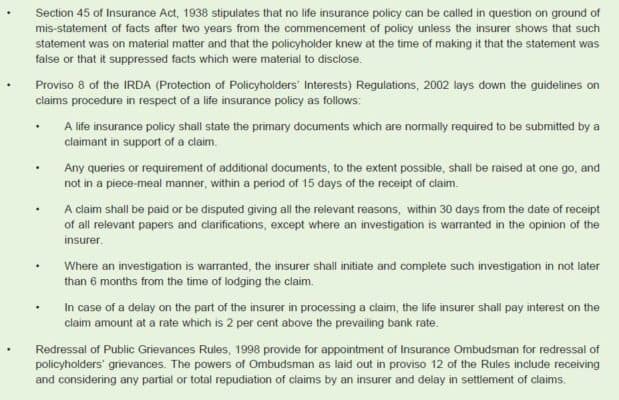 Trouble is, what a claimant considers a delay and what is legally allowed, are two different durations!

There is a crude way to point out that higher the claim amount, higher the scrutiny, resulting possibly in a repudiation or delay.

The claim settlement table published by IRDA has the total benefit amount along with the number of claims intimated, pending and repudiated.

This is a screenshot from the individual death claims table of the 2012-13 annual report. The entries have been merged with the column headings to aid reading.

The benefit amount per claim when compared over time can shed some light on the ‘average’ claim amount handled by the insurer. Of course, this ratio is not a sound way to make any solid inferences. Let us however run with it and see where it takes us. Before you pan me in the comments section, remember that I acknowledged this! 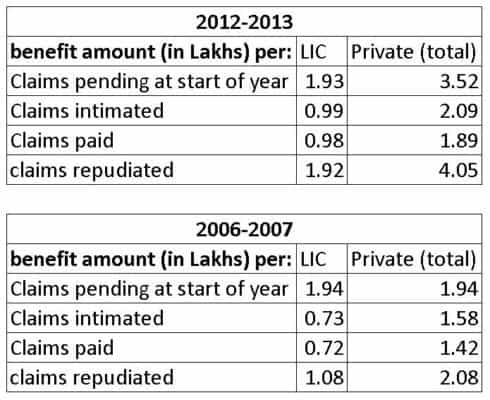 In 2012-13, this increased by 36% for LIC and nearly 33% for privates. It must be kept in mind that the number of private players increased by about 50% in this period.

Thus, there is a significant increase in the claim amount per policy handled by LIC.

Even more  striking is the 78% increase in the benefit amount per repudiated claim (1.08 to 1.92) . How would you interpret that?

For LIC, the claim amount repudiated per claim can only increase from now (their e-term policy is only one reason). For the privates, I think it should come down in the future or at least not increase so dramatically.

One could argue that the new insurers would have processed early claims and hence would have scrutinized stringently. However, let us  read too much into this.

Simply because it is clear enough (even without this data) that the privates are likely to scrutinize claims tougher than LIC.

This can also be seen by

2) Privates have more claims pending at the end of the year than the start of the year (not shown). The converse is observed for LIC.

The number of pending claims at the start of the year decreased from 9574 in 2006-07 claims to 8856 claims in 2012-13 for LIC. While it nearly doubled for the privates, primarily because the number of such life insurers have increased.

When the denominator doubles, the ratio can double only if the numerator (benefit amount) quadruples!

This implies that the privates are handling  much higher claim amounts than LIC (not much of a finding!). One could argue that this is the reason, their CSR is lower.

Even if you don’t wish to make much of these ratios, I hope that you agree with my contention that if the claim amount is big (as in a term insurance policy), LIC too would scrutinise it carefully. Simply because such an amount would be higher the average claim amounts they process.

1) nature of the policy. LIC typically has a higher number of small ticket claims.
2) the time it takes to settle. It can take up to six months or even more to settle a claim. As long as a claim is settled within the FY, it will be counted for computing CSR. From a nominees point of view, that is a ‘delay’.

Now, if the privates had a CSR equal to that of LIC, they should have settled 1.24 Lakh claims (instead of the actual 1.13 Lakh claims).
This is less than 10% off. This is approximately the difference between the CSR’s, but when you look at it this way, I think it does not appear so bad!

If you are worried about this, then you should have enough money (including possible loading if any) to afford an LIC policy (offline or online).

I suggest you pick a private life insurer who has been around for at least 10 years (with no plans to leave – check recent news reports) with a CSR close to, or above the total private average.

Even better, if the insurer has a CSR history consistently higher than the current private average.

It will take you less than 30 minutes to access the IRDA reports, locate the “Individual death claims” table and scan the necessary numbers.

Once you can short-list 2-3 insurers, compare the price for a policy (without loading, but inclusive of service tax) using the premium calculator available at their websites.

Choose the cheaper among the two.

Apply immediately. Do not ask anyone else for an opinion.

Should have appeared first in a ‘how to’ post!

For Young earners: Insurance Calculator For the Young

M. Pattabiraman(PhD) is the founder, managing editor and primary author of freefincal. He is an associate professor at the Indian Institute of Technology, Madras. since Aug 2006. Connect with him via Twitter or Linkedin Pattabiraman has co-authored two print-books, You can be rich too with goal-based investing (CNBC TV18) and Gamechanger and seven other free e-books on various topics of money management. He is a patron and co-founder of “Fee-only India” an organisation to promote unbiased, commission-free investment advice. He conducts free money management sessions for corporates and associations on the basis of money management. Previous engagements include World Bank, RBI, BHEL, Asian Paints, Cognizant, Madras Atomic Power Station, Honeywell, Tamil Nadu Investors Association. For speaking engagements write to pattu [at] freefincal [dot] com About freefincal & its content policy Freefincal is a News Media Organization dedicated to providing original analysis, reports, reviews and insights on developments in mutual funds, stocks, investing, retirement and personal finance. We do so without conflict of interest and bias. We operate in a non-profit manner. All revenue is used only for expenses and for the future growth of the site. Follow us on Google News Freefincal serves more than one million readers a year (2.5 million page views) with articles based only on factual information and detailed analysis by its authors. All statements made will be verified from credible and knowledgeable sources before publication. Freefincal does not publish any kind of paid articles, promotions or PR, satire or opinions without data. All opinions presented will only be inferences backed by verifiable, reproducible evidence/data. Contact information: letters {at} freefincal {dot} com (sponsored posts or paid collaborations will not be entertained) Connect with us on social media Our publications